being30 Third Weekend in Quarantine in Barcelona

Last Sunday, (one week ago to the day) the prime minister of Spain, Pédro Sanchez extended the quarantine period from the 15 days and said it would last until at least April 12th 2020. I thought the quarantine period would be longer when initially announced and thought it may be at least a month. Europe in general has been very slow to respond to the virus and therefore there are more cases to deal with. I was sure that China would come out of this situation as the rest of the world was deep into it and it seems to now be happening.

On Tuesday this week, they announced that China is now unlifting the lockdown which has been for 2 months. The lockdown in the Hubei province started Jan 23rd restricting the movement of 45 million people.  On April 8th so in just two weeks, China  will start to remove the travel restrictions they put in place at the end of January. Schools will still be closed though so we cannot expect the schools that have closed in the UK and Europe to open anytime soon. Wuhan city has a population of 11 million but the whole area that was locked down in the province saw more than 2500 deaths due to the coronavirus. This accounted for 80% of the deaths in the whole of China.

This week the number of deaths soared past those of China. Spain has a population of 46 million, and the death rate shows no sign of stopping. The fact that Spain surpassed China with the number of deaths was also noted in some papers including the Guardian. As of today, Sunday, March 29th, The United States has more cases than China ever had. The US had its first case January 21st after a patient from Wuhan travelled back to Washington State but due to government inaction, the number of cases surpassed China on Friday.

Going back to Spain, the government declared a state of emergency on Friday, March 13th, when there were 5,232 cases. Then a week later this had gone up at least 4 times to 21,571 number of cases. On Friday, 2 weeks after the state of emergency was declared, there were 56,188 people infected with 4089 dead. Today worldwide, we have over 650,000 cases. 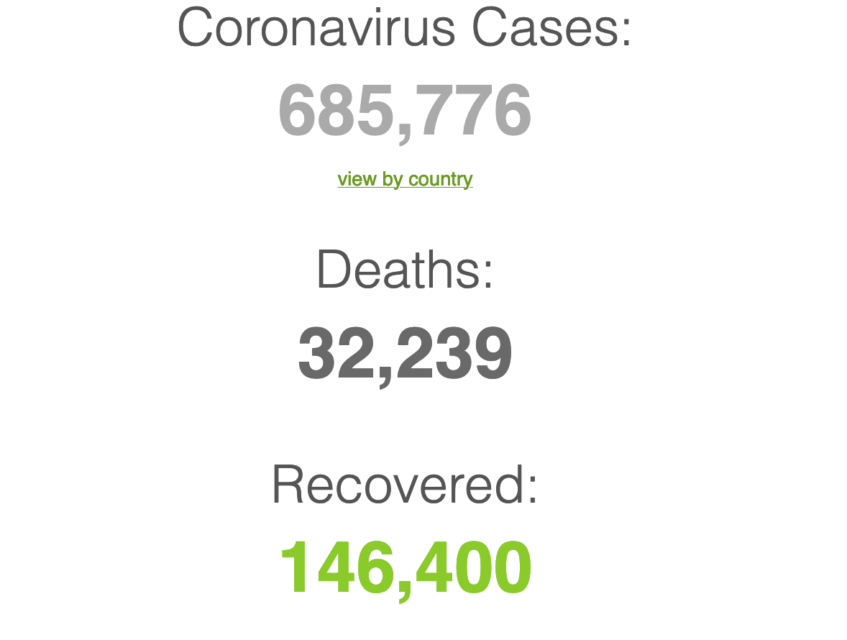 Why are the cases increasing?

We have not seen the number of those infected with the virus drop as the government and everyone here in Spain, was hoping so I wanted to shed some light on why this is the case.

As I said in my last post, doctors and medical staff are not protected at work. This means they are more likely to become infected with the disease. 13% of those infected with the virus are medical staff. This is the highest out of China and Italy.  These stats were from Wednesday so that means there could be  this week and after the weekend. Italy has seen 29 doctors die from the virus and more than 5000 of medical workers tested positive for the virus. This is significantly higher than in China when it was 4%.

This is a photo shared online that shows the difference between those working in China and those in Spain. It is obvious to see that Spain is seriously lacking protection. 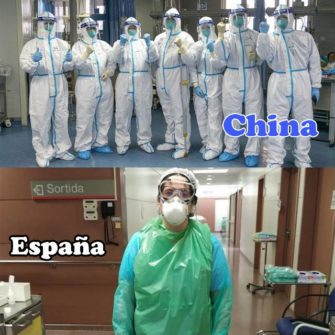 Only this Monday (so 10 days after the state of emergency was declared), were more medical masks starting to be delivered but there are still not enough ventilators and there are not enough people to actually help with the patients.

This week, it was discovered that the coronavirus tests the Spanish government had ordered were defective. What a complete waste of time, money and resources. How incompetent can the government be?

Not everyone can get tested, only those who are showing the symptoms and then it takes 24 hours to get the results. During this time, there is no room in the hospital and patients were sent home to infect the rest of the family. The image below (that was shared on WhatsApp) shows the contagious period. 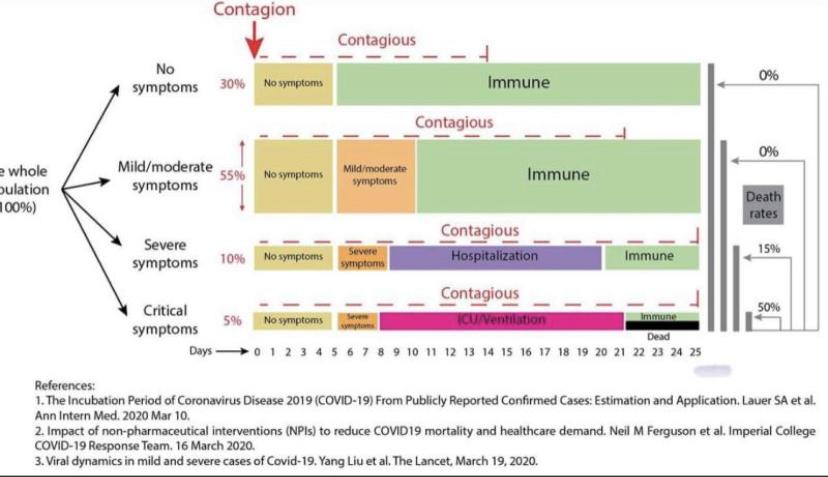 How much was spent on healthcare in Spain? According to the European Commission, Spain spent 9.2% of GDP on health care or 2,374 Euros per capita in 2015. The EU average was 9.9% but even this does not seem to be enough. What was interesting to read was that 71% of health spending in Spain is publicly funded which was low compared to how much tax and social security Spanish tax residents pay. The EU average for out-of-pocket payments is 15% of total health spending, but in Spain this is 24%. With a pandemic like the coronavirus, it is not surprising that Spain cannot cope. Despite the tax of up to 45% and the social security payments (6.35% for employees, depending on the type of contract, and 29.90% for employers), plus between 10 – 23% capital gains tax applied to the sale of all assets and property, including if you just have the one home, plus the inheritance tax of up to 34%, not enough money has been plowed into the health care system. Very shocking indeed as many say that Spain has one of the best healthcare systems in the world yet the doctors are paid one of the lowest salaries in Europe. Where does all this tax money go? Certainly not on doctors or nurses wages.

What if we look at the UK? How much was spent on healthcare there? A report from 2016 shows that the total current healthcare expenditure in the UK was 9.8% of gross domestic product (GDP), which was higher than the median for (OECD) Organisation for Economic Co-operation and Development member states. But this was the second lowest of the seven nations in the G7. The UK should be paying far more into the health care system than they currently are. The NHS needs all the funding they can get but with Brexit, which was a complete waste of money, more than £6 billion has been spent on that so far, and it is not even finished. The NHS will break with this coronavirus as the UK already has already seen a number of cuts instead of having that £350 million a week ploughed into as was promised by Boris Johnson. The UK also does not have enough protective equipment for the medical workers and what is worse is those who are retired are being asked to come back and help with the virus.

The Spanish government has realised that the quarantine has not been effective. Apparently many people have still been going out and about which has led to the virus spreading even more. As of yesterday, the government are now preventing anyone that has a non critical job to stop working. This means those who do not work in health care, public transport and supermarkets will have to stay at home. Those who do not will receive a fine. We are yet to see if this applies to those doing deliveries (eg Amazon) where people at home can order their supplies.

Only time will tell if these latest measures will be effective. I hope when all this is over and the government are doing their budget in the future, they will decide to double or triple the investment into healthcare and pay those who are doing this important job what they deserve.