being30 A Long Weekend in Barcelona – Must See Attractions

A Long Weekend in Barcelona – Must See Attractions

There is so much to see and do in Barcelona, it is hard to squeeze it all in a weekend. Barcelona is wheel chair and family friendly in some parts of the city. For example the Exiample area, the pavements are wider and some of the metro stops have step free access such as Arc de Triomf, Sants Station, but there are still not enough.

Here is my list of attractions to visit in Barcelona

You can either visit it from the outside or go in to see the works of Guadi. If you do go inside, you will need to reserve online before you do. I went a couple of years ago and do not remember it costing that much. But recently I have seen this website and it is 29 Euros per person to enter which is quite expensive That might be due to peak season.

The beach spans from the W hotel to Selva del Mar, up to 4.5 km of beach. Theat is a lot of sand, especially as it is imported from from Egypt. Before the Barcelona Olympics in 1992, the beach was home to industries and was dirty, so many people did not use it. The money from the Olympics improved two of the beaches and made 5 more. The ones closer to the city are more crowded but as all are urban beaches it is very busy in summer. I think it is very clean, considering the amount of people visiting every day and I often see cleaners throughout the day picking up litter. There are many bars on the beach called Chirungitos. They are more expensive than local bars, but depending on the Chirungito you go to, they are cheaper than London and Sydney bars. 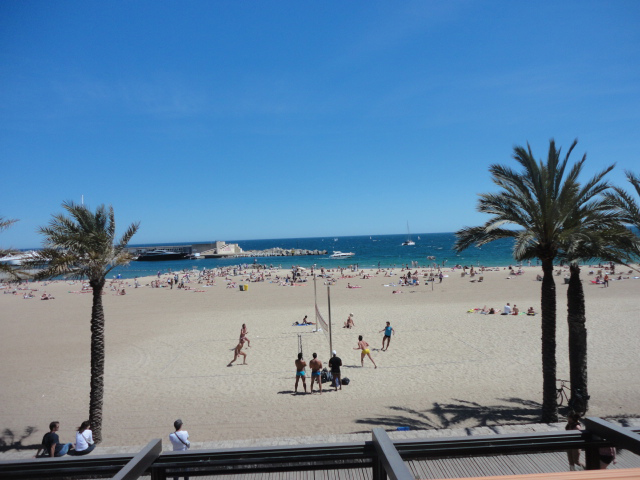 This is the Oxford Street of Barcelona and starts from Plaza Catalunya and goes up to Avenida Diagonal. There are a range of shops including the top end brands such as Stella McCartney, Prada and VAlentina. Other high street brands such as Zara, Addidas, Puma and Mango can also be found here. Along Passeig de Gracia is the exclusive Majestic Hotel and the very famos La Pedrera and Casa Balló, Gaudi’s work. Lined along Passeig de Gracia are many restuarants plus El Nacional, which was, believe or not a parking lot ! Now it has been completely renovated and includes tapas bars in the middle and more formal sit down dining on either side of the walk way. Prices are more than in a standard tapas bar, but it is a beautiful setting.

The nearest metro to the south is Plaza Catalunya and also Passeig de Gracia. To the north it is Metro Diagonal.

The park is on the border of the Exiample area and El Borne. It actually used to be a military citadel in the 18th century. This was later destroyed and made into a park and has over 17 hectares of land where everyone can enjoy. For those that like zoos, there is one at the end of the park, there is also a lake and you can also rent rowboats for most of the year. The headquarters of the Catalonia Parliament occupy the former Govenor’s palace and the arsenal building. There is also a waterfall designed by Josep Fontseré with a young Antoni Gaudi. When I last went to the park, there were people tap dancing in the band stand. Other times there are groups dancing. There are also ping pong tables for people to play.

Hop on Hop Off Bus

I really like these buses wherever I go, but they are on the more expensive side, I paid around 25 Euros for mine but sometimes there may be offers. Barcelona has a lot of these buses and it is very handy if you want to see the city but don’t or cannot walk all the way around it. With the bus, it is very easy to get to Park Guell.

There are many stops, all dotted around the city. The busiest stops are in Plaza Catalunya and near there.

Construction started for this park in 1900 and is located in the north of Barcelona. Gaudi’s park and was free to enter until end of September 2013. They said they had to put a price on it to stop over crowding and are now limiting numbers to 800 people per day. It is a UNESCO Heritage site and therefore they have to preserve the area around Gaudi’s work. The park is less crowded inside the area away from the artwork but you do need to arrive at your designated time, no more than 15 minutes early. So plan your day well. A general ticket costs 7 Euros online. The park is does not have the best access for those with push chairs or wheel chairs. 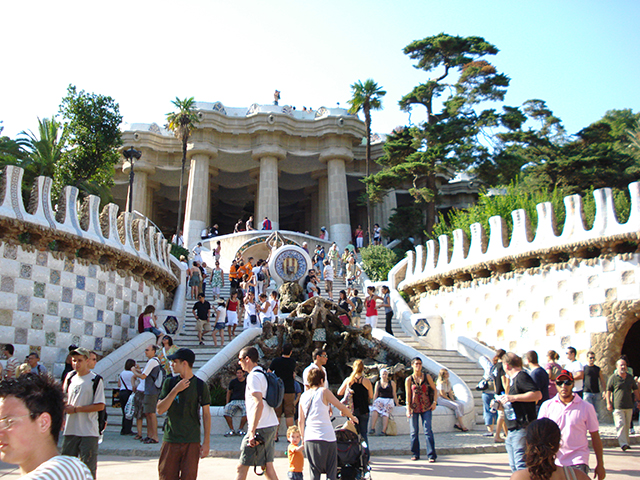 There are a lot of steps to the park from the nearest metro – Lesseps or Vallcarca on the L3. Or you could jump in a cab which would bring you near the entrance.

Port Vell is the old port of Barcelona and now is home to many restaurants, shops and bars after it was renovated in time for the Olympics in 1992. It is also home to the Palau de Mar which was a former warehouse. The Palau de Mar is home to the Museum of Catalonia, which has exhibits in chronologically order from the Stone Age to present day. You could definitely spend a whole day inside.. Port Vell starts at the bottom of La Rambla, where the Columbus monument is located. The monument was finished in 1886 and there are is a viewing gallery from the top with panoramic views of Barcelona. Along the water front, is the Rambla de Mar, a wooden walkway that takes visitors to the Aquarium and the shopping mall, Maremagnum. 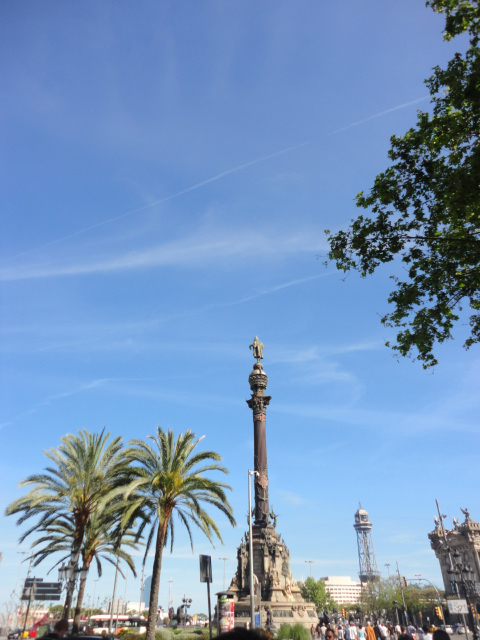 This is one of the oldest neighborhoods of the city and was very poor. Now seems inhabited by many tourists. It can be very crowded in summer time, but I would still recommend visiting. It is family friendly and wheelchair friendly too. However the nearest metro is Barceloneta and it has an elevator. Check out this list of metro stops to see if they have lifts/elevators or not. One place I recommend going to for a drink and bite to eat, in Barceloneta is El Vaso de Oro (http://www.vasodeoro.com/) I have been here several times and they serve great tapas. Arrive outside of peak times (eg arrive at 12 noon and early evening, around 6/7. It is a small restaurant/bar so it fills up quick.

Most of the big shops in Barcelona are closed on Sundays. For example the department stores like El Corte Ingles. Maremagnum is a semi-open shopping mall of three floors open on Sundays. The top floor is full of restaurants while the middle and ground floor have quite a few shops including Natura, Pull & Bear, Springfield, Superdry , H&M, Claire’s, Calzedonia, Desigual, Mango, Lacoste, Lefties and MaryPaz.

There is so much to see and do in Barcelona, I only wrote down a few attractions. I will be writing more soon.